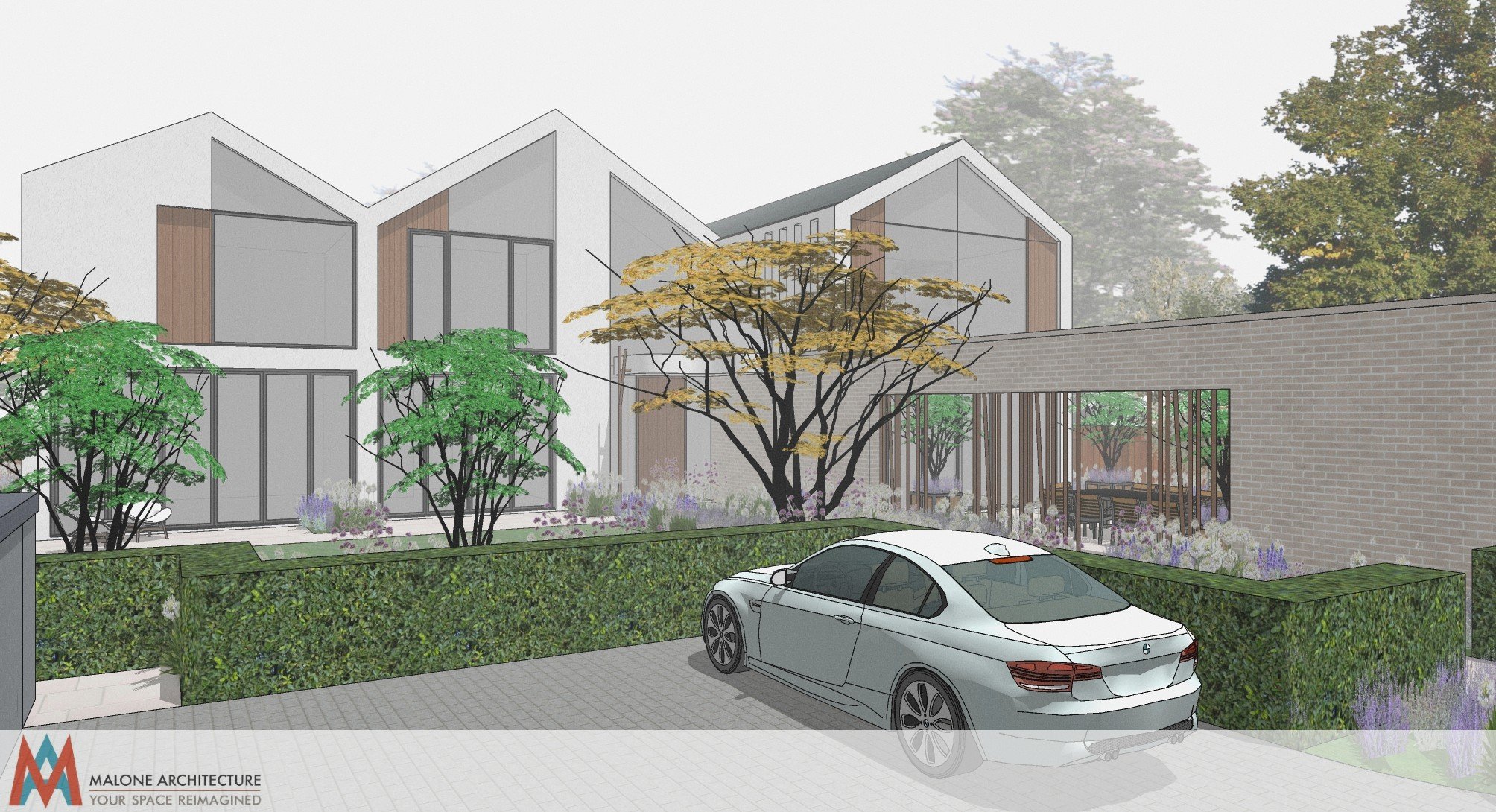 We were approached by a couple who had purchased a 1970s ‘chalet style’ house in a ‘back-lands’ plot on Kingston Hill and were looking to replace it with a modern, energy efficient family dwelling. The aim was to maximise the accommodation on the site with a two-storey house and single-storey annexe. ​

Constructing a new house was deemed to be most sustainable as the existing building at Windfall required extensive work to upgrade it to modern standards required for the building fabric. The improved efficiency in terms of energy usage for water, heating and lighting will result in a building of longevity.​

Internally, the house is arranged around two circulation axis, one features the accommodation stair, with a large rooflight above and the other accesses each of the rooms on both the ground and first floors. At each end of the corridor on the first floor there is a large electrically operated opening roof window. ​

As the house is situated at the rear of the plot and approached from the front it was important for us to provide a distinction between the semi-private front garden, and approach to the front entrance, and the more private garden courtyard adjacent to the kitchen-family room. ​

The guest accommodation is in a separate annexe but has a visual connection back to the kitchen-family room across the more private courtyard. A brickwork wall with a large opening and columned screen defines but also offers permeability between the front garden and the private courtyard.​

The volume of the house is broken up with three gables. On top of the roof, in a hidden plant area between the gables, are the air-source heat pump, solar panels and the mechanical ventilation and heat recovery system plant (MVHR). ​

Large solar control triple glazed doors and areas of glazing puncture the externally insulated and rendered shell of the house to the South. The house exceeds current Building Regulations standards for thermal insulation and control of solar gain. ​

To the East, West and North, where the walls are as close to the boundary as possible, the window openings are smaller and glazing below 1.7m obscured to maintain privacy for both the occupants and neighbours alike.​ 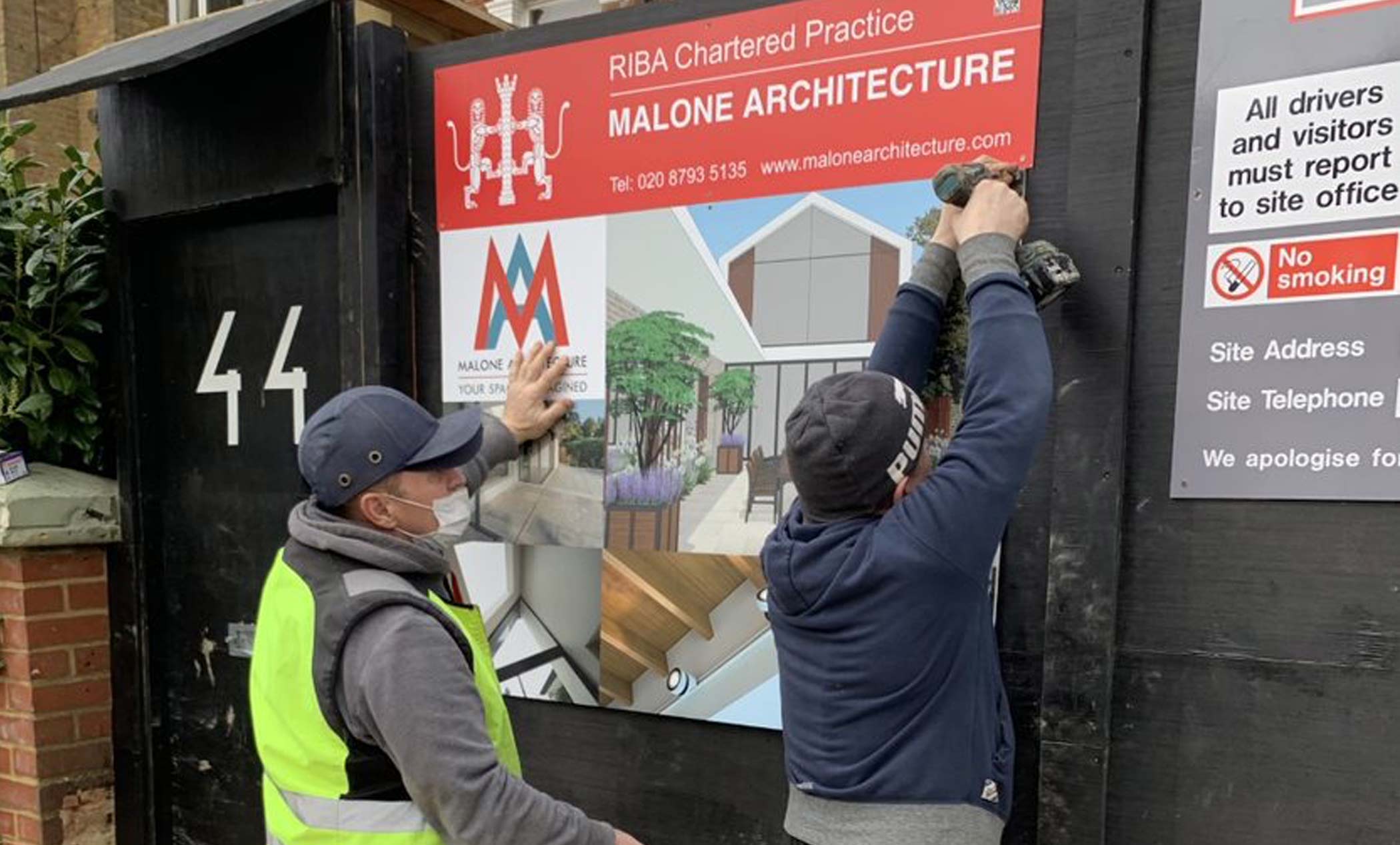 ​The aim of the brief was to maximise the accommodation on the site with a two-storey house and single-storey annexe. ​
​
At ground floor level we were asked to create the living accommodation and on the first floor the sleeping accommodation. We analysed the site for sun-path, overshadowing from large trees in adjacent plots and considered this together with the likely parameters of the Royal Borough of Kingston upon Thames planning department. ​

The bulk of the foot-print of the house was designed to be located on that of the original house and the driveway, thus avoiding damaging roots of the numerous trees. An arboricultural report confirmed our concept design assessment and we proceeded with the developed design of the house.​

Royal Borough of Kingston-upon-Thames Planning Department were consulted at a Pre-Planning Application meeting where the proposal was thought to be uncontentious owing to the fact that the building:​ 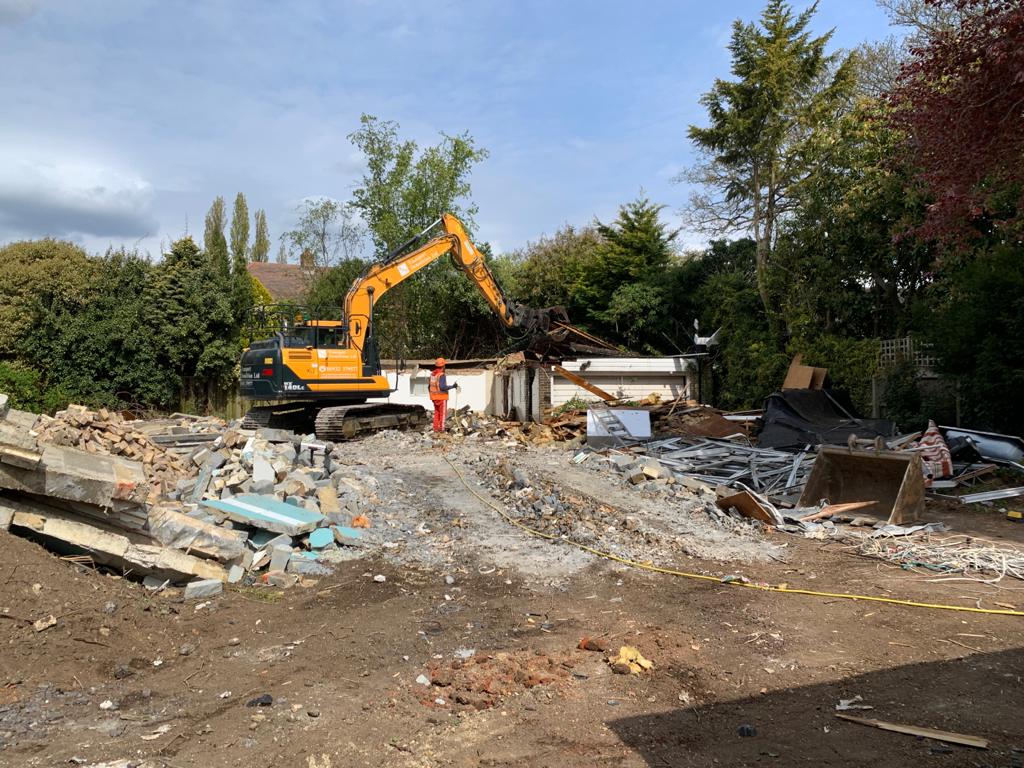 Demolition digger clearing the site ahead of new build construction

Below ground drainage being installed. 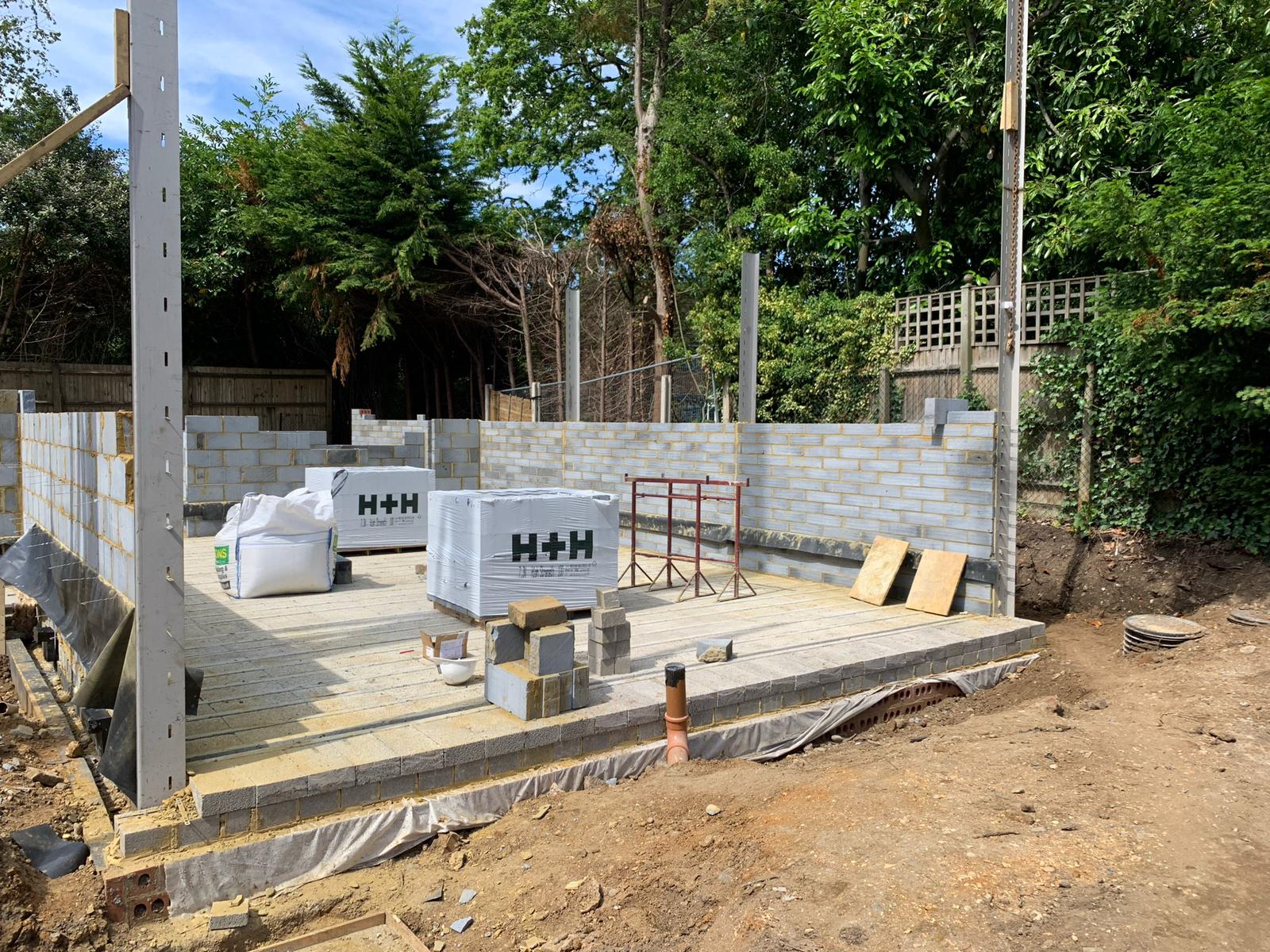 Blockwork walls are going up quickly now that the pre-cast concrete floor structure has been completed.​ 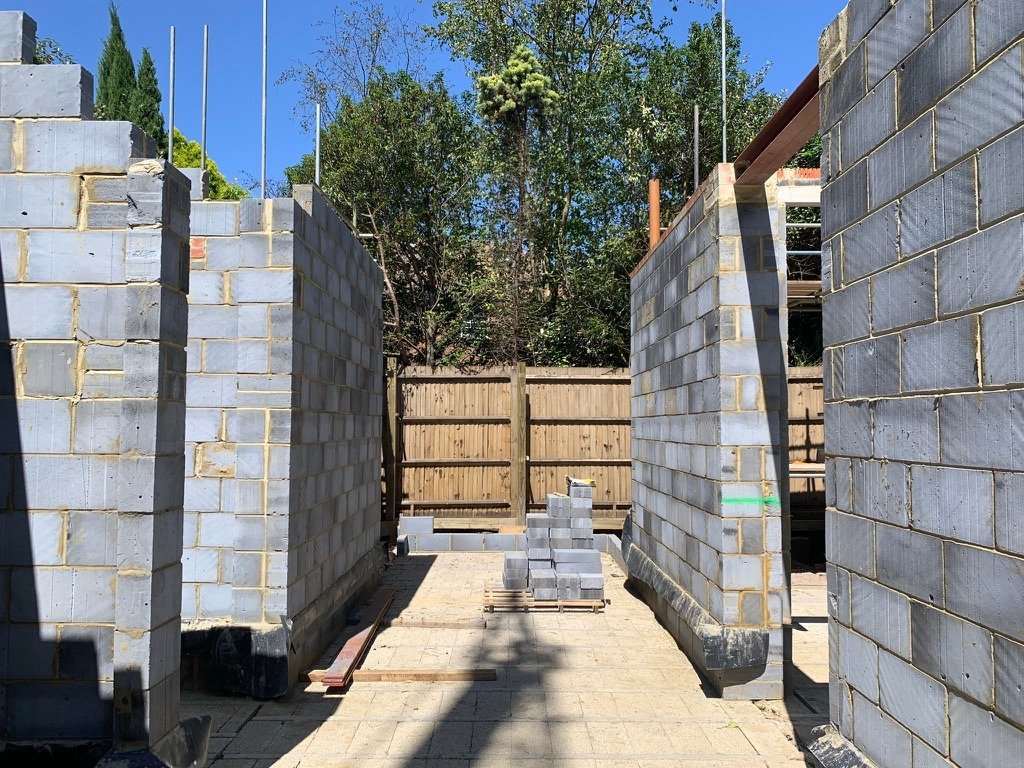 The ground floor walls are now up to the underside of the first floor level and ready for the precast concrete floor structure to be installed.​ 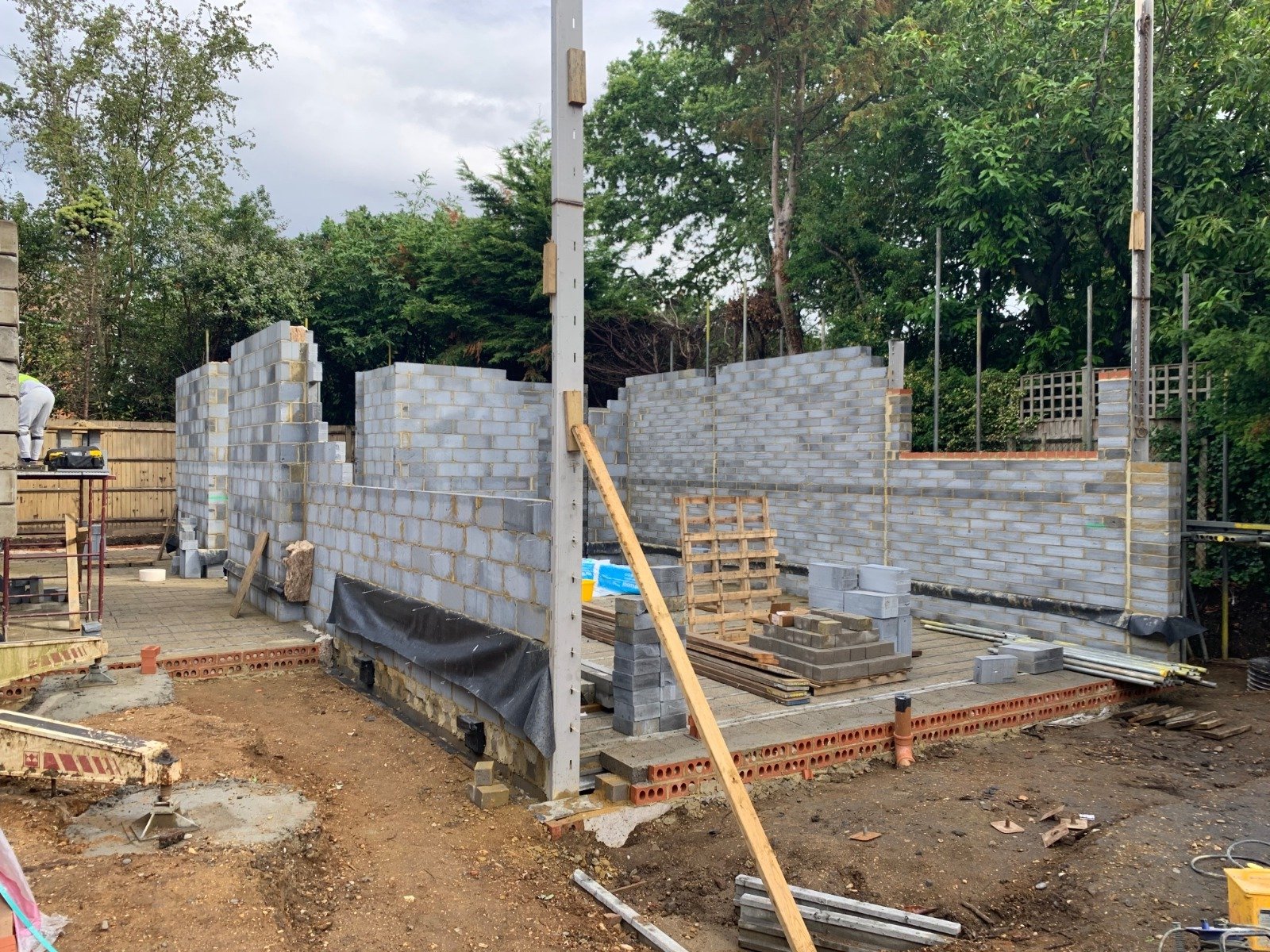 Scaffolding going in and deliveries of building materials arriving daily.​ 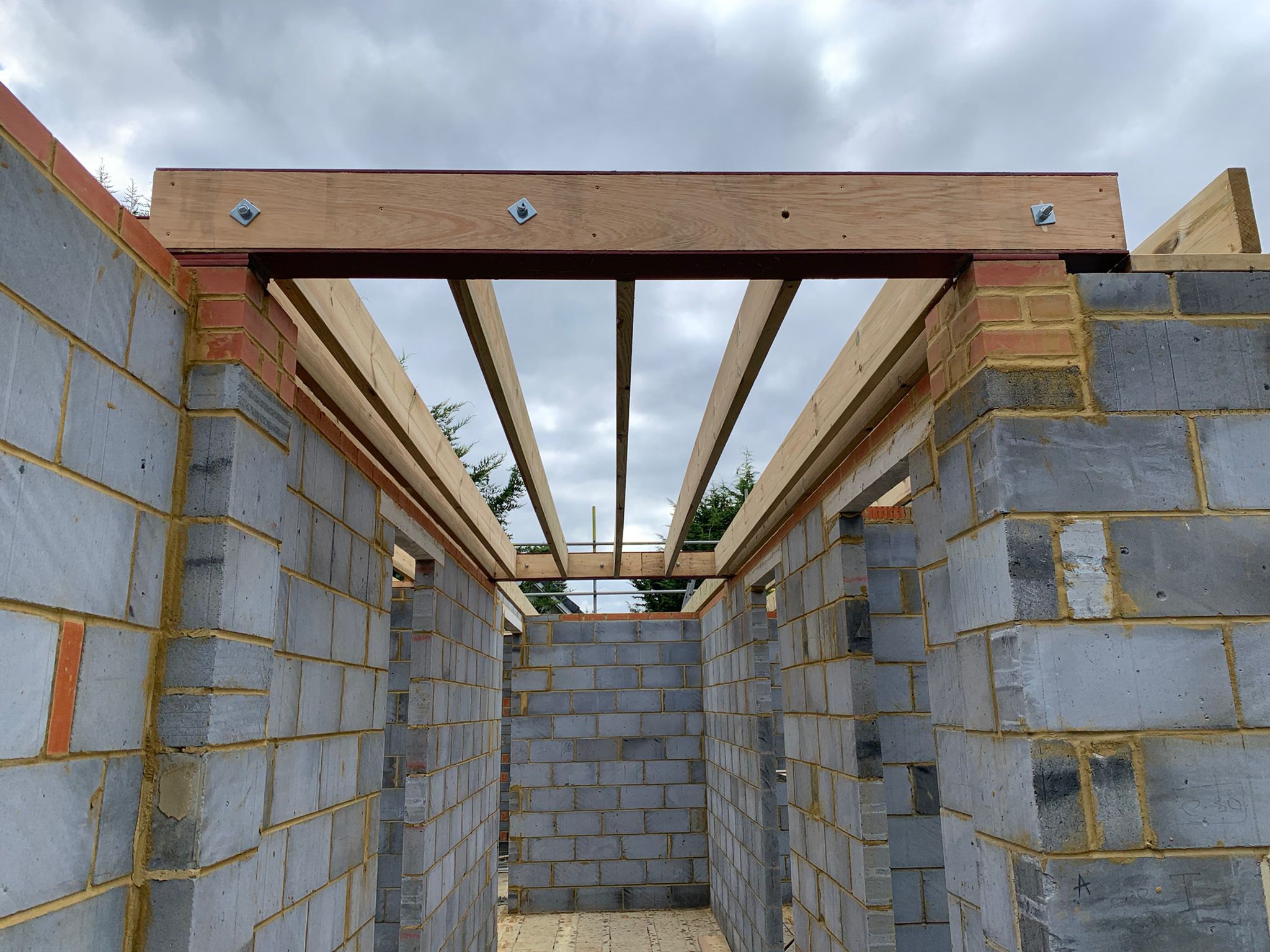 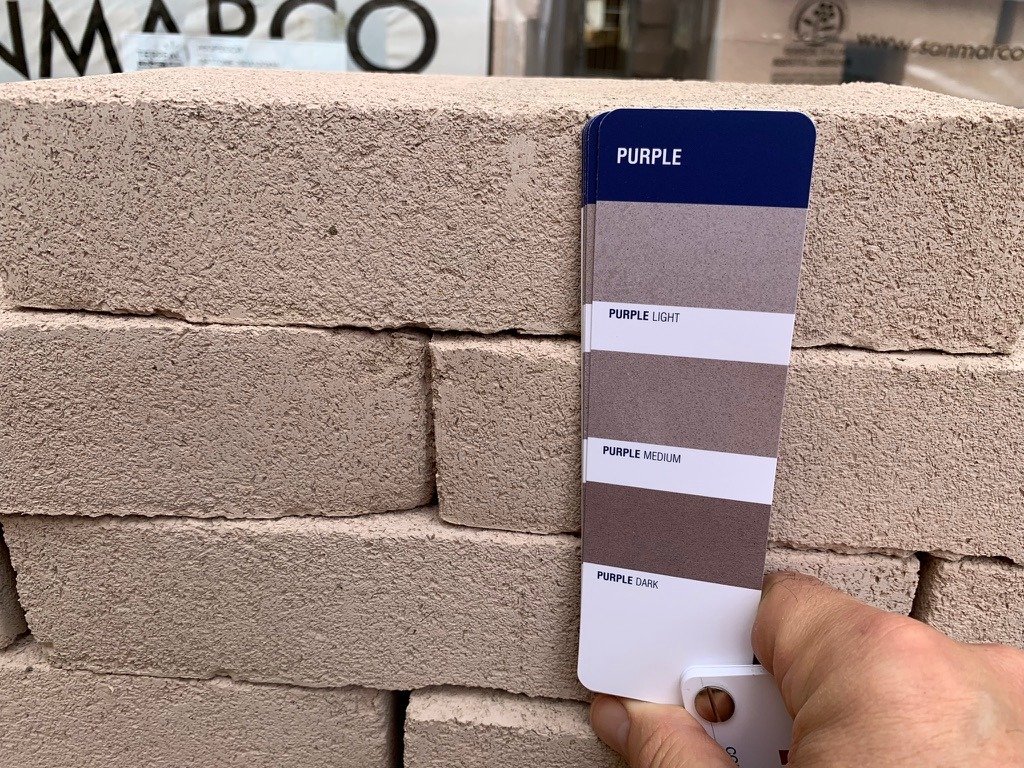 Selecting a coloured mortar to go with the bricks which will be used to build the link wall. 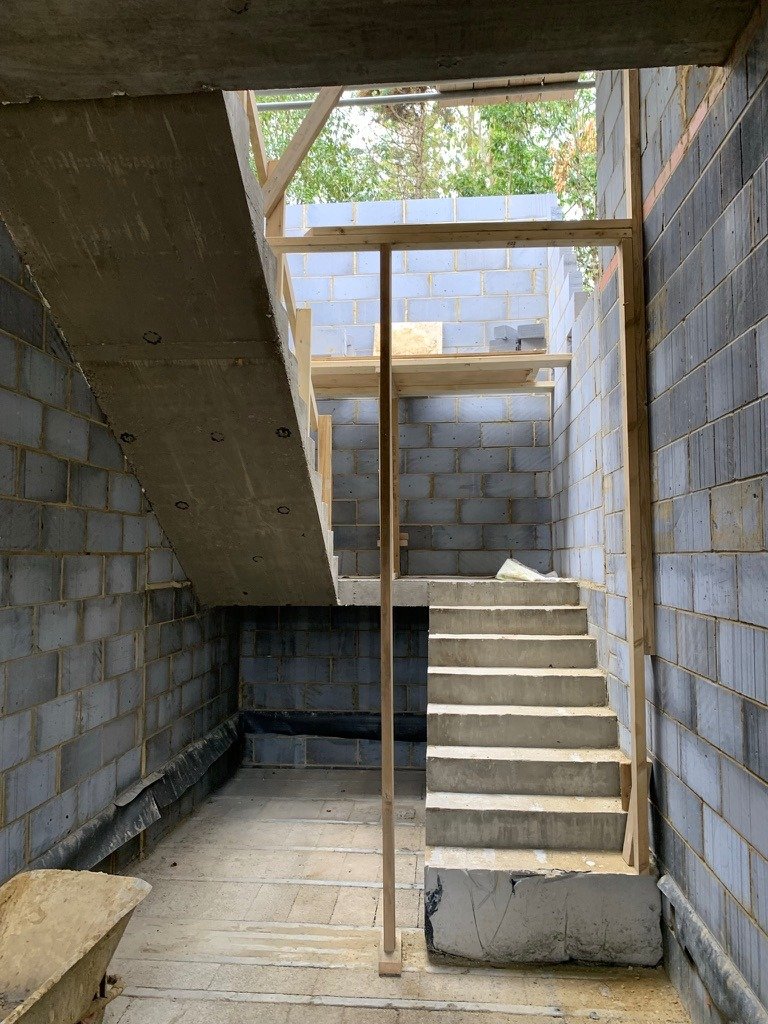 Concrete stairway has been cast to allow access to the first floor.​ 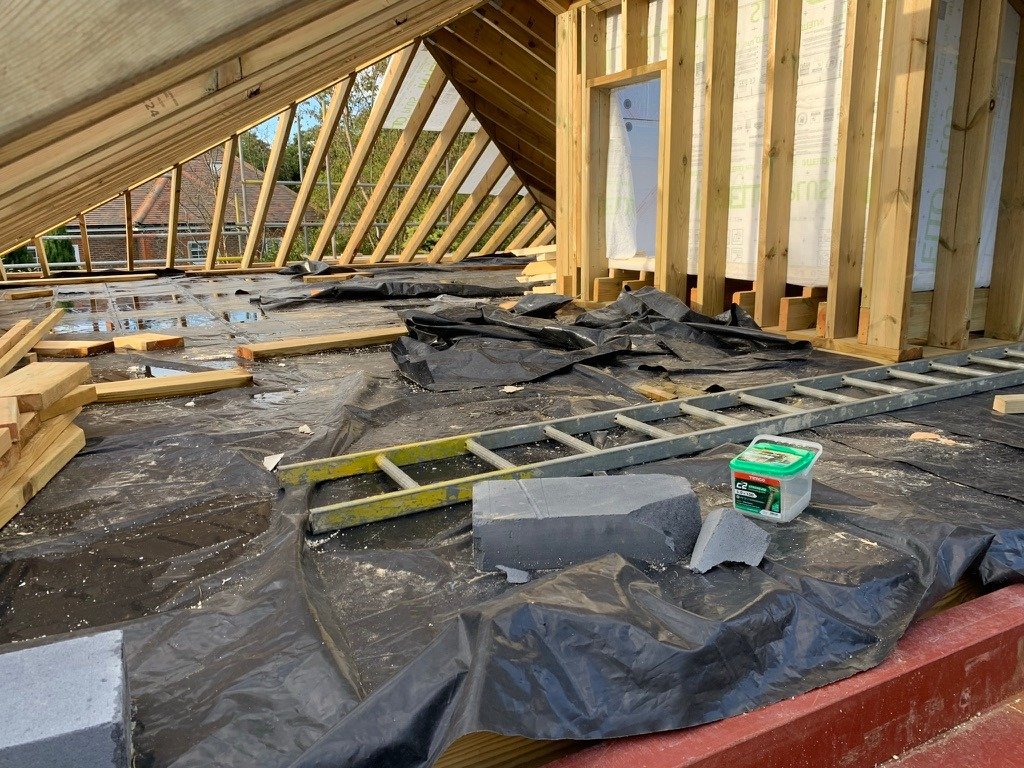 Roof structures are all up and the finishes are going in​ 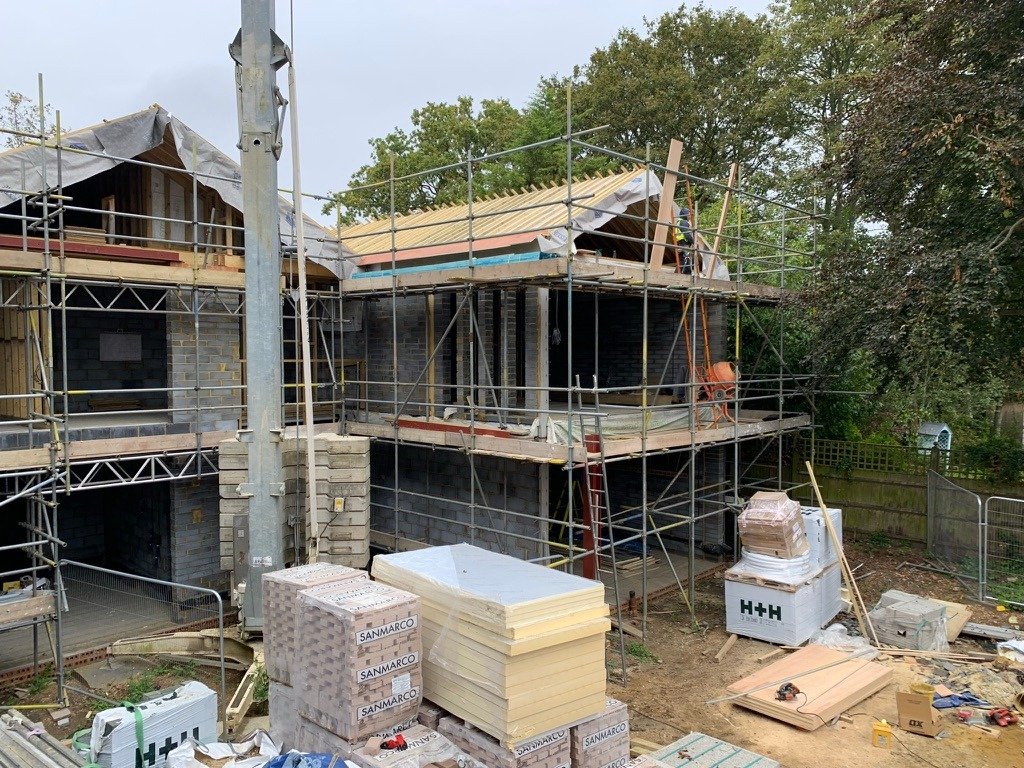 Roof finishes are being added and internal partitioning is in the process of being installed in readiness for first-fix services.​ 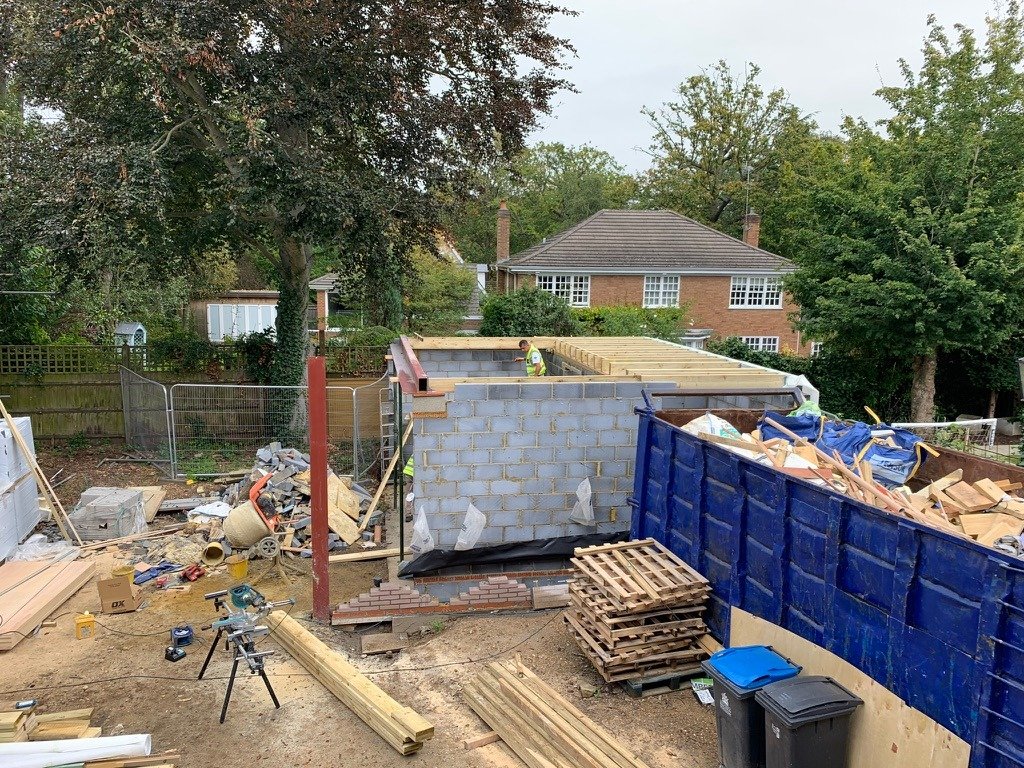 Construction has begun on the guest annexe comprising a double bedroom with dressing room and shower room​. 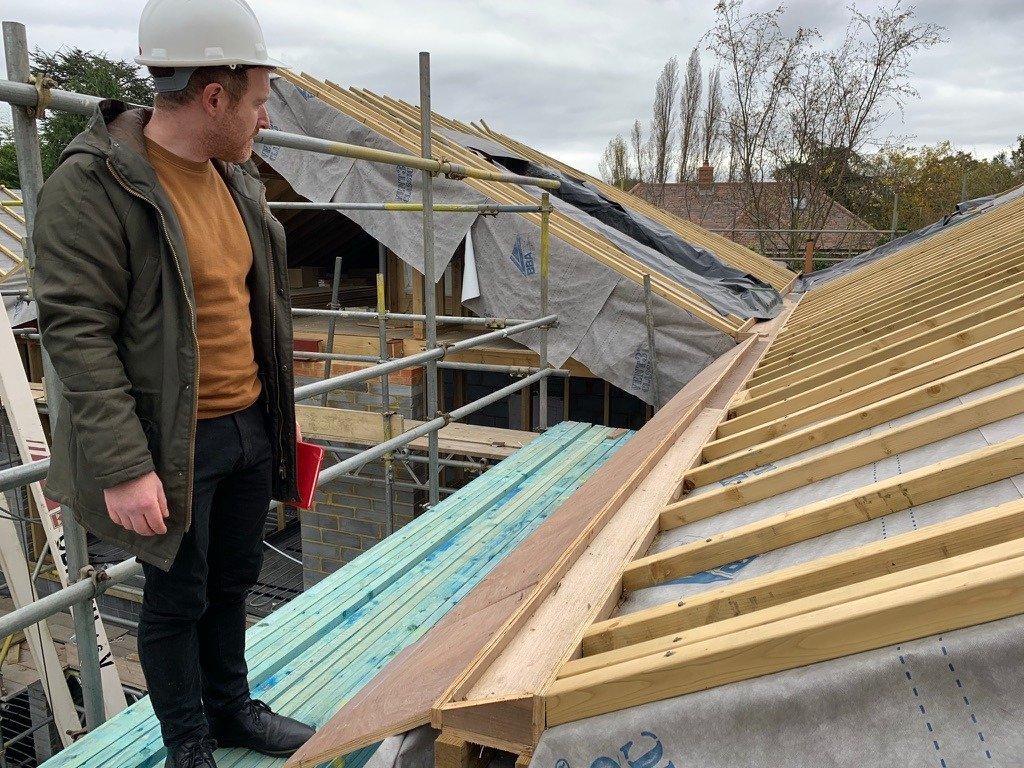 Our Senior Architectural Technologist on site checking out the lofty heights and concealed gutter.​ 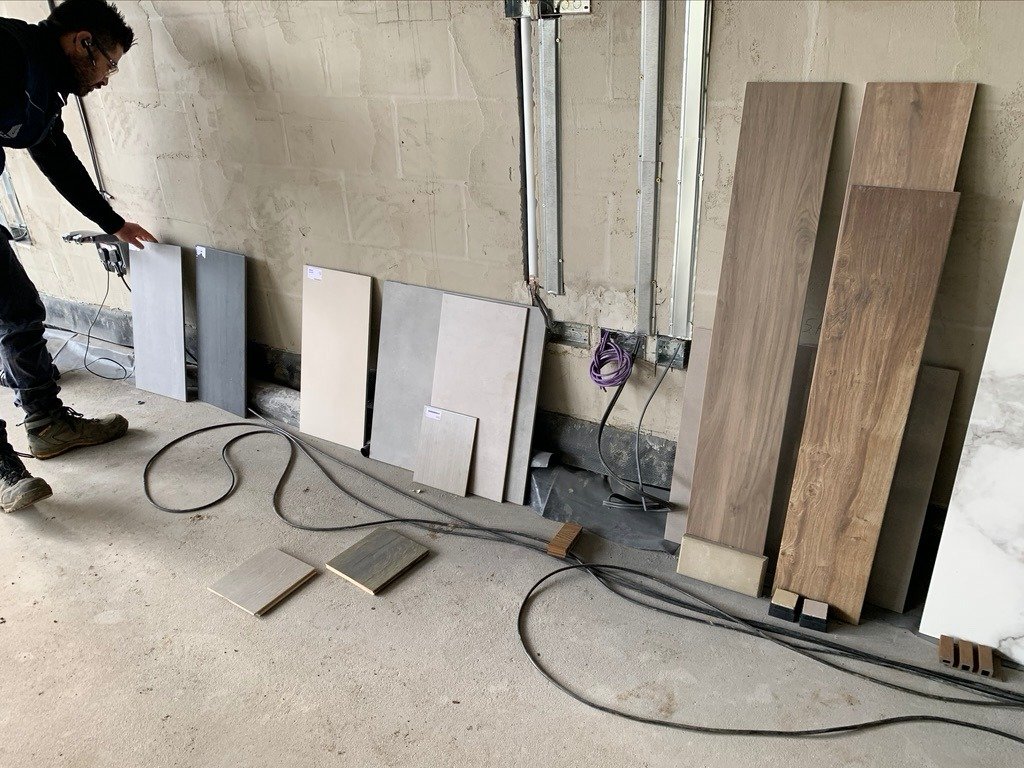 Reviewing the client’s selected floor finishes with the builder.​ 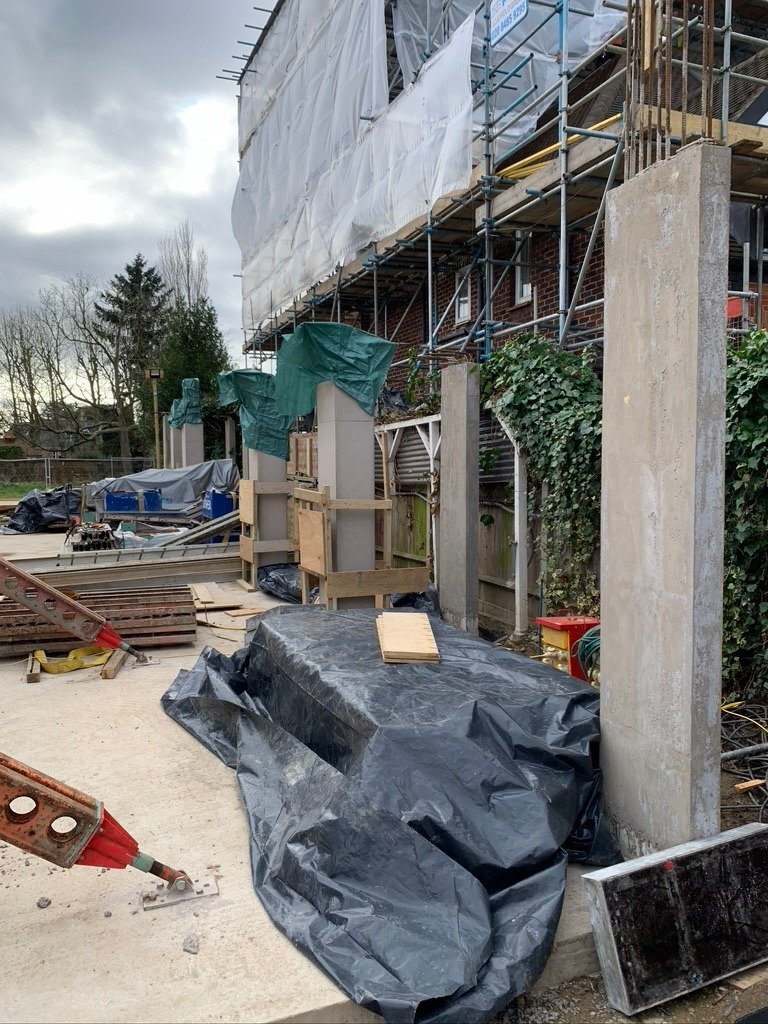 Finishing touches being made to these beautiful fair faced concrete columns ​ 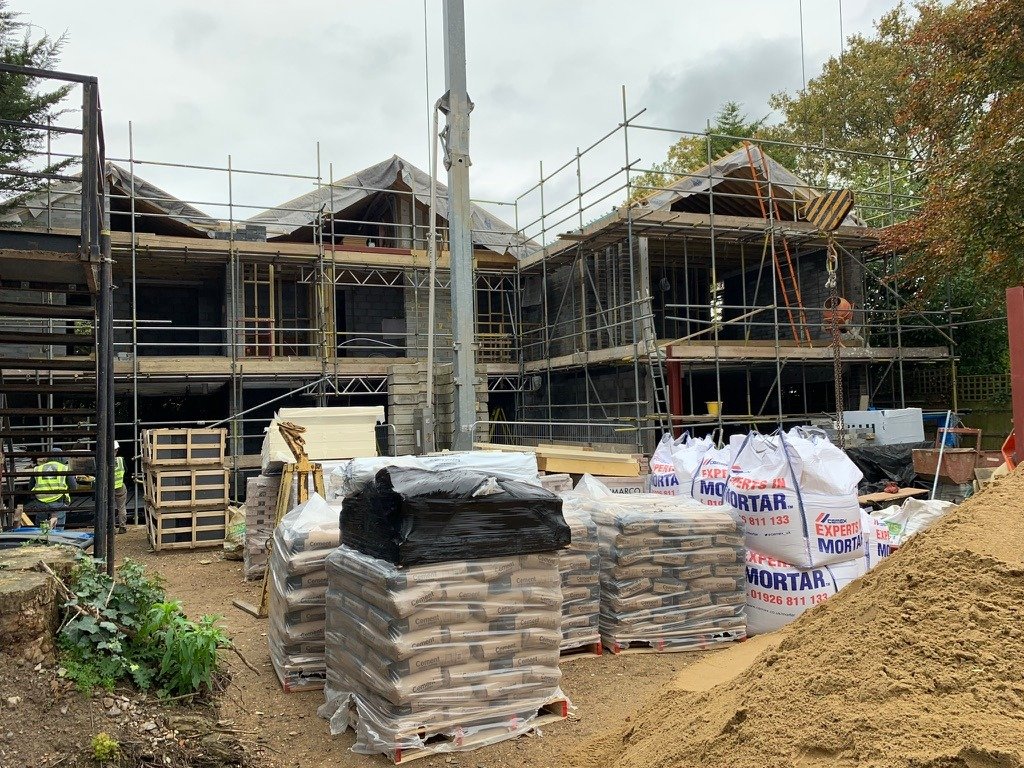 The scale and scope of the project beginning to emerge​. 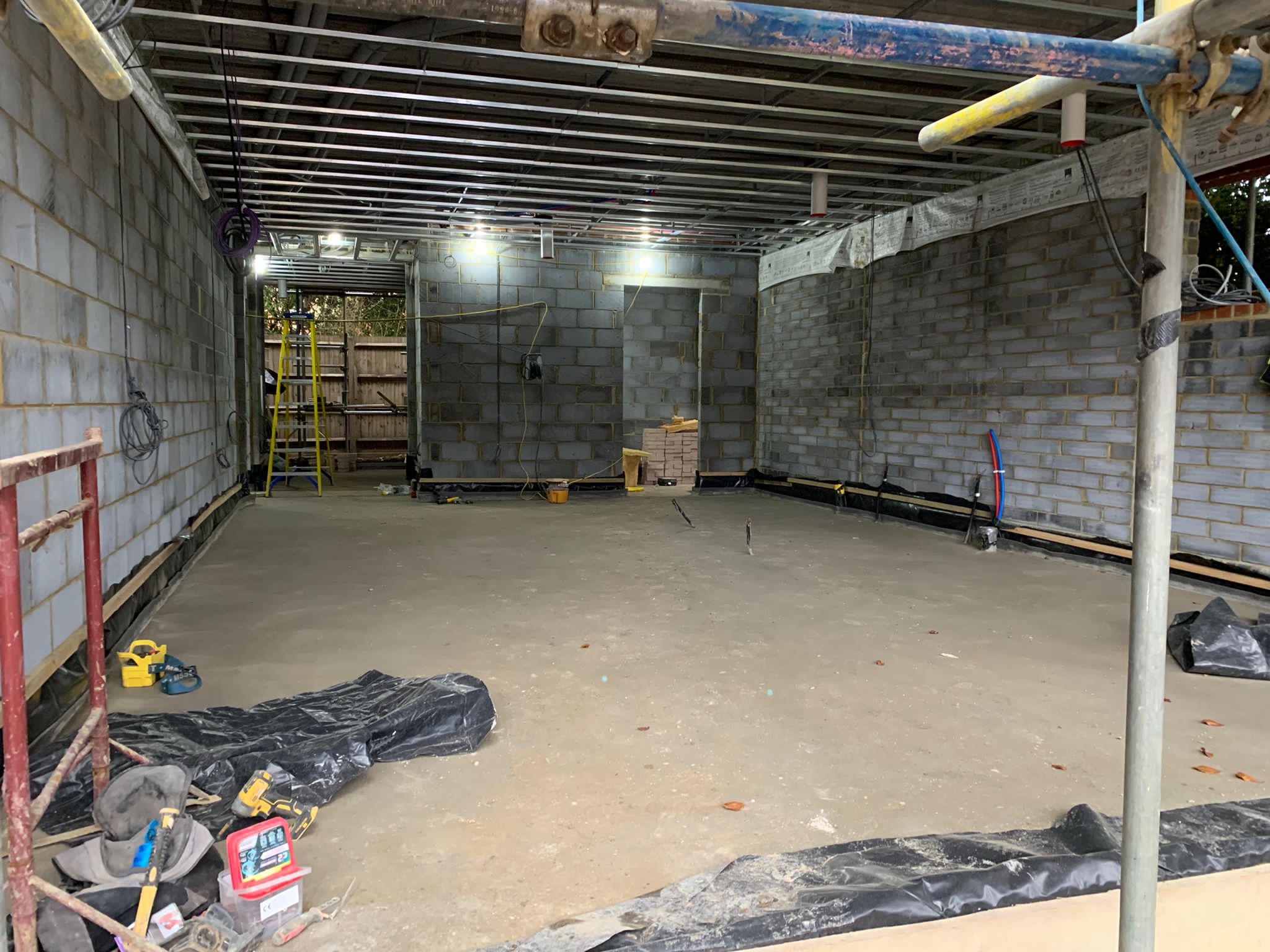 Brickwork has commenced and the floor screed has been installed – mixed on site and pumped into place in just 4 days!​ 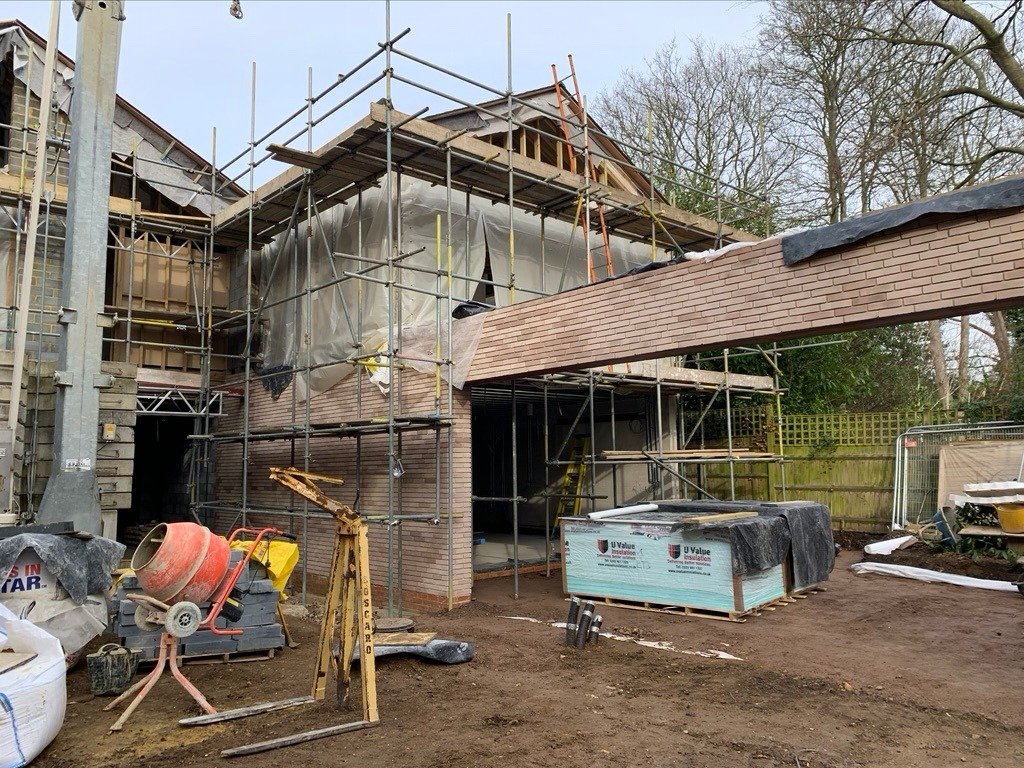 Link wall has been erected​. 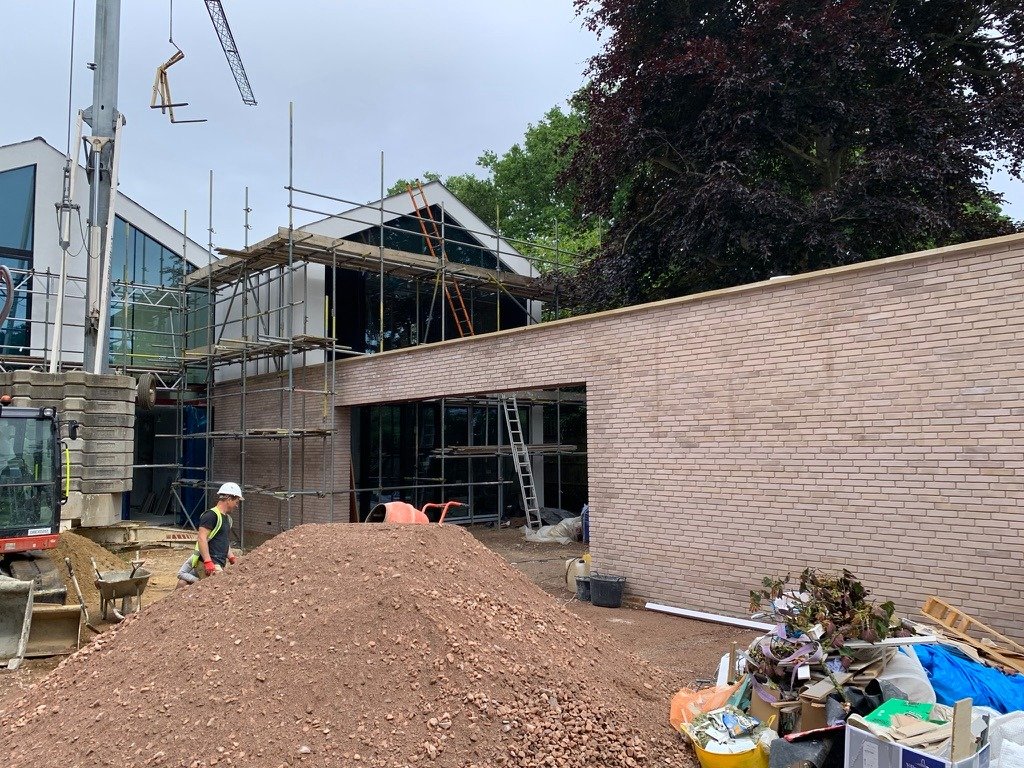 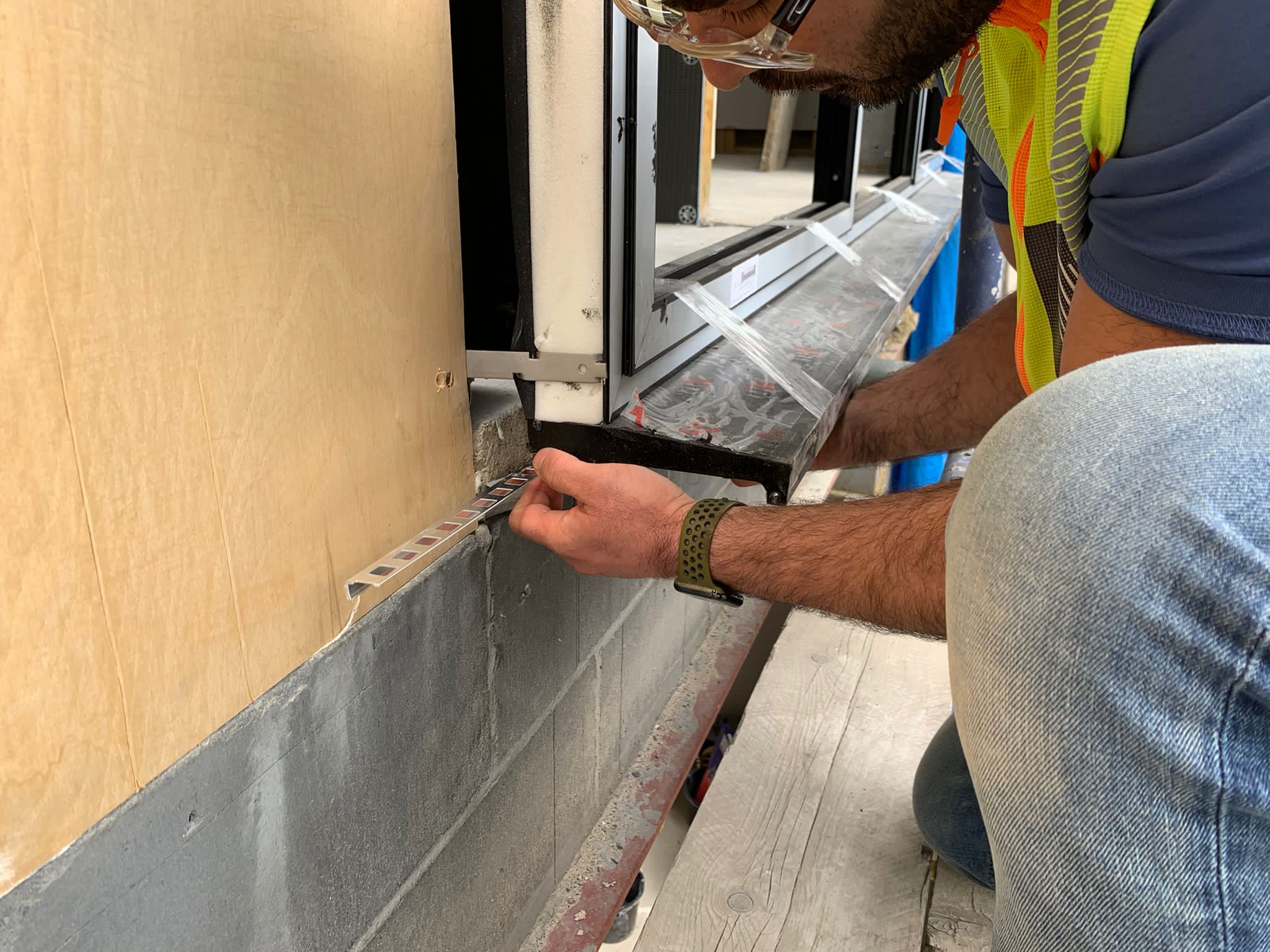 Builders inserting EPDM membranes (synthetic rubber) around the windows to seal them to the air-tight finish behind the blockwork walls.​ 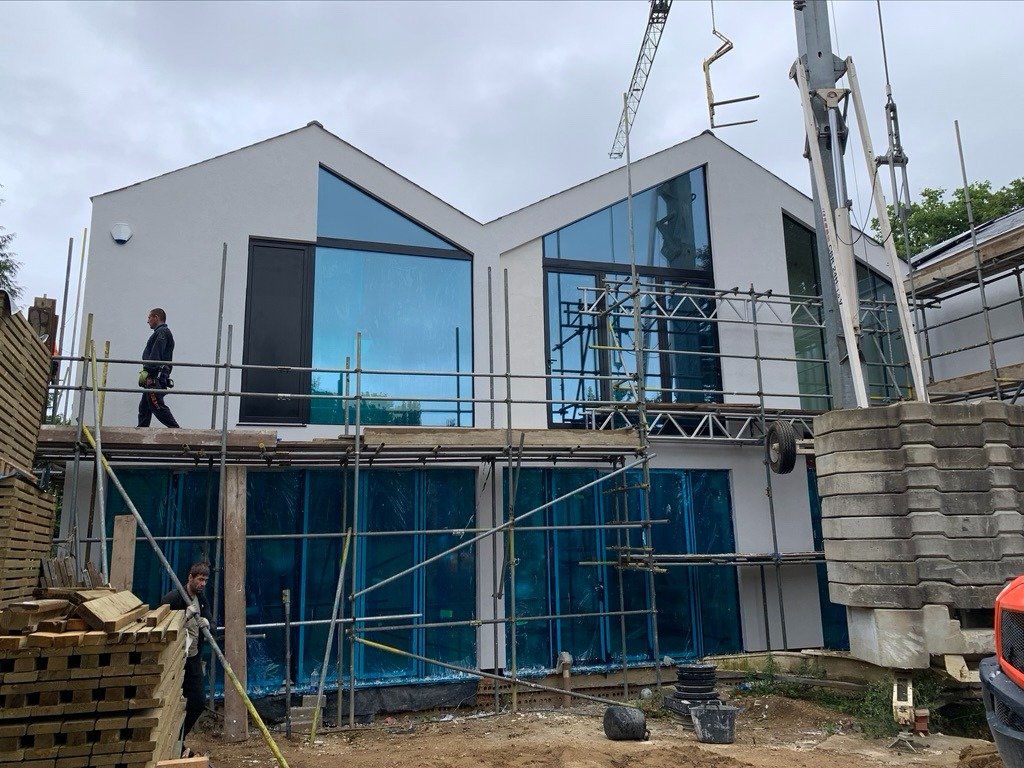 Glazing is in and external concrete walls have been painted​. 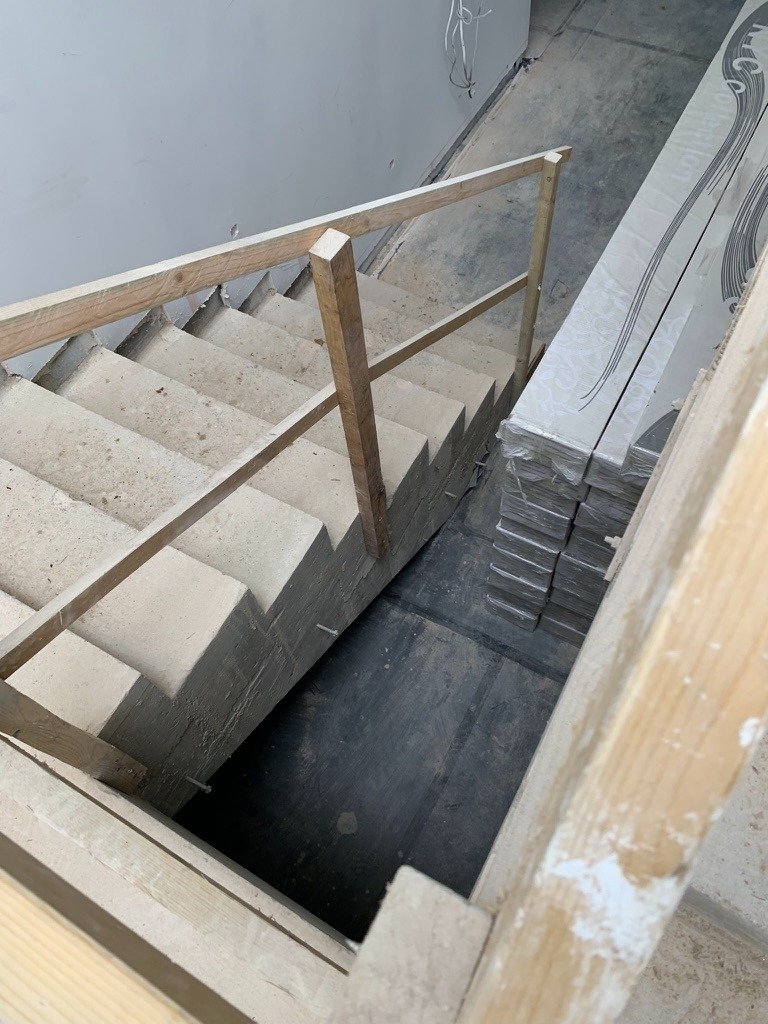 Staircases and internal fixtures and fittings now being installed​ 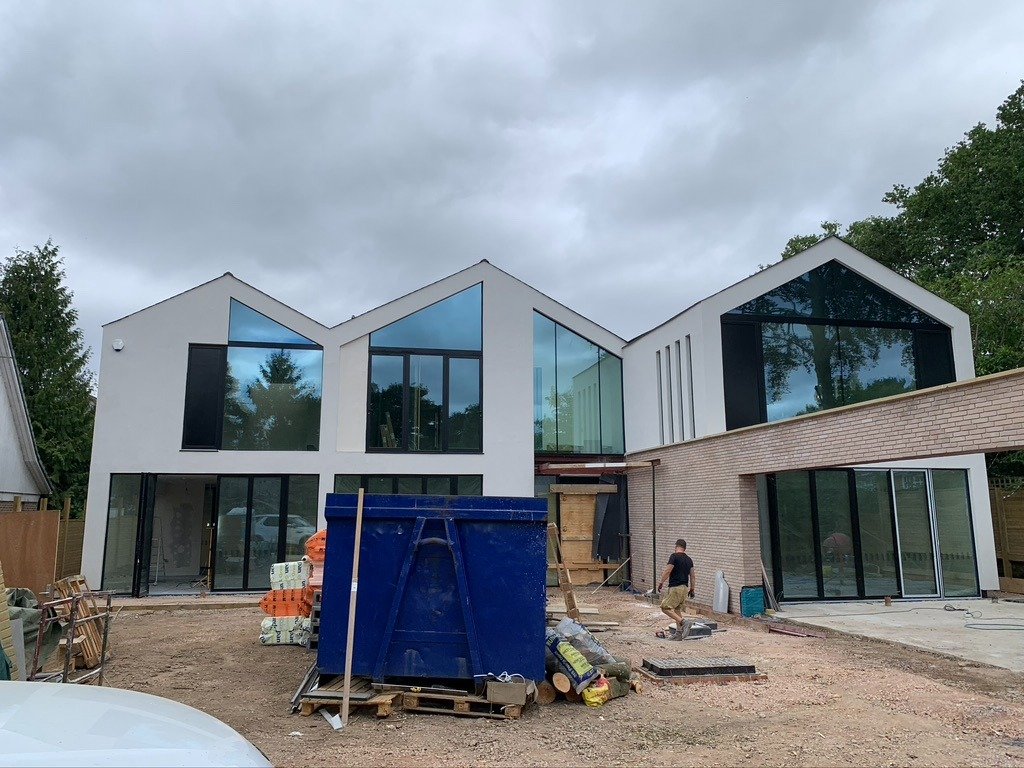 Scaffolding is down and front elevation looks spectacular 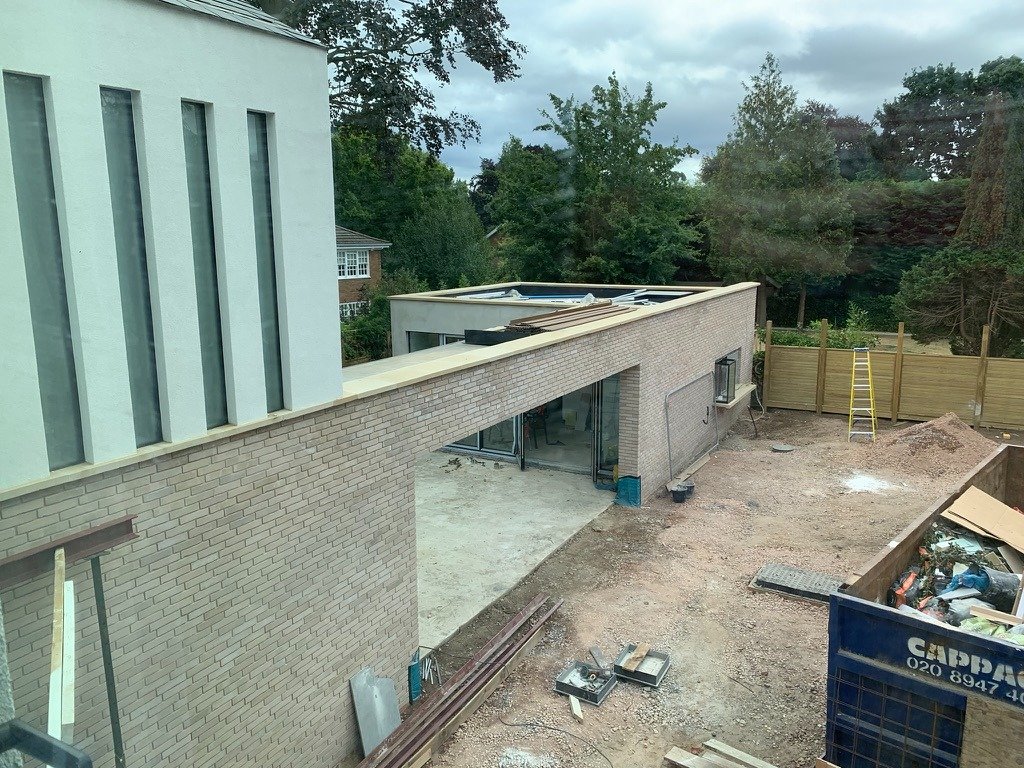 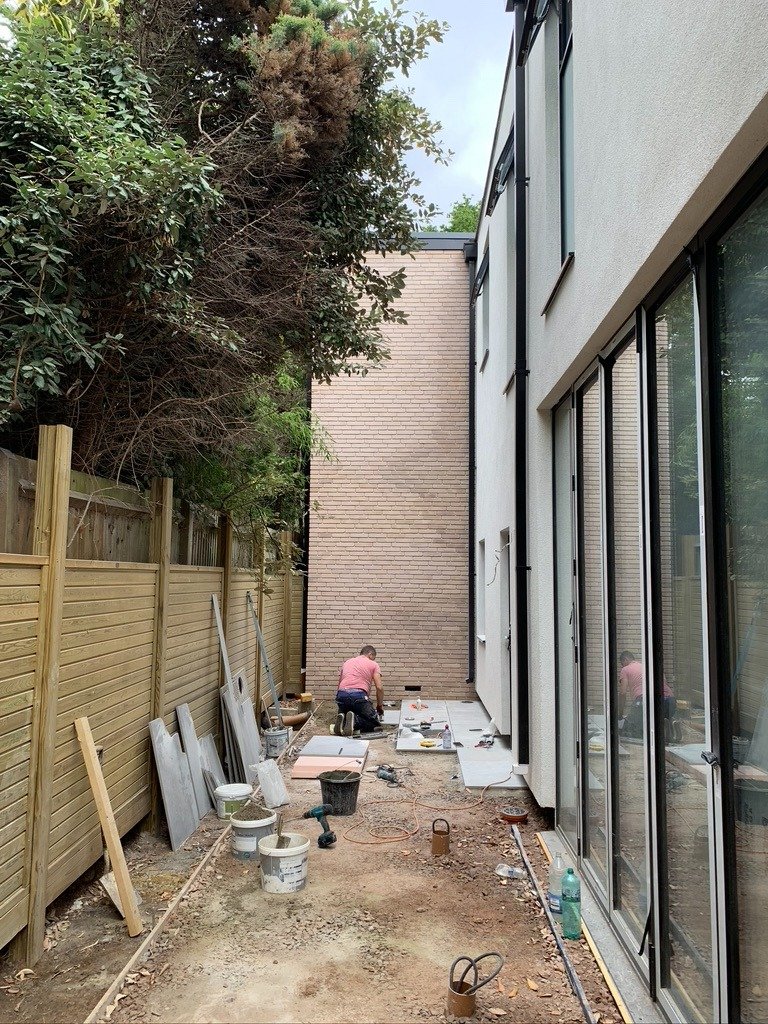 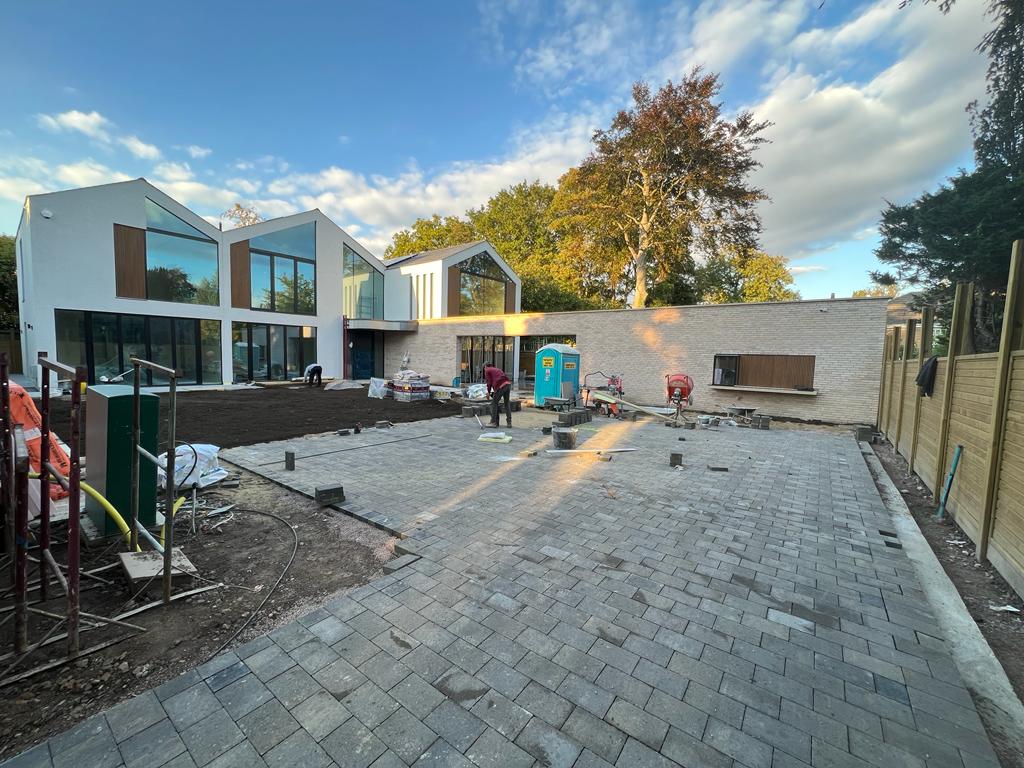 Insulating and sealing of ground floor

Underfloor heating throughout (pipework embedded in the floor screed) 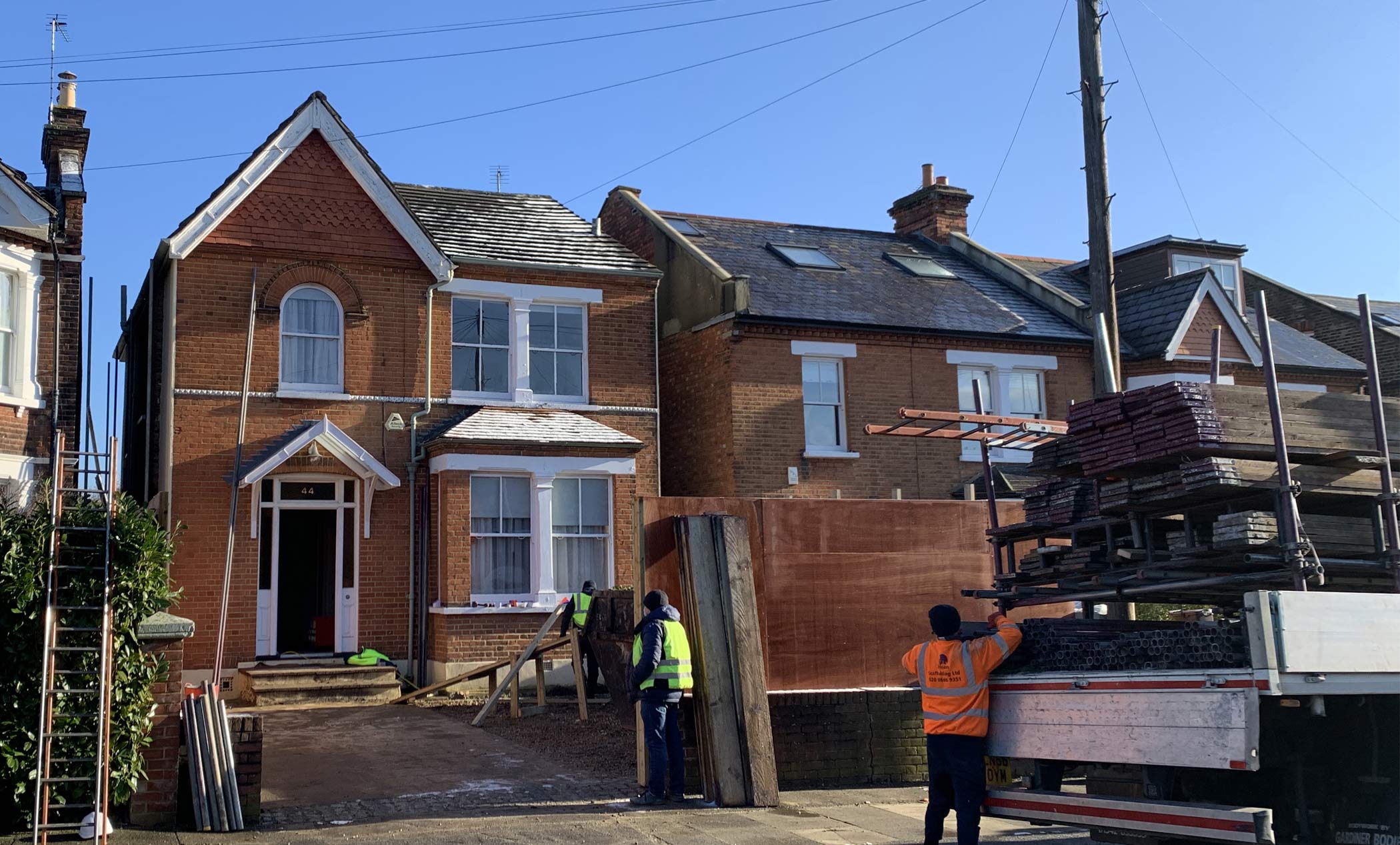 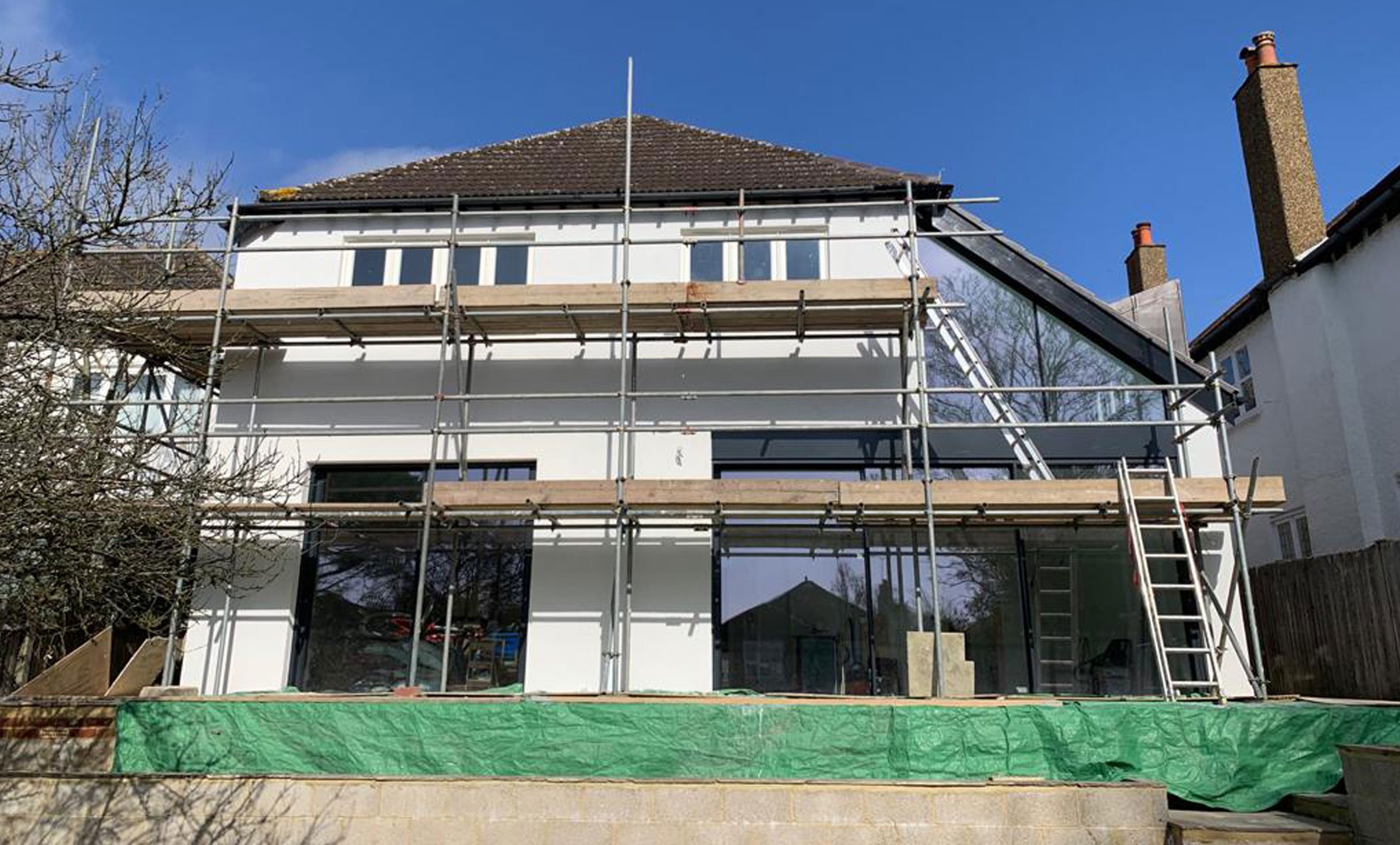 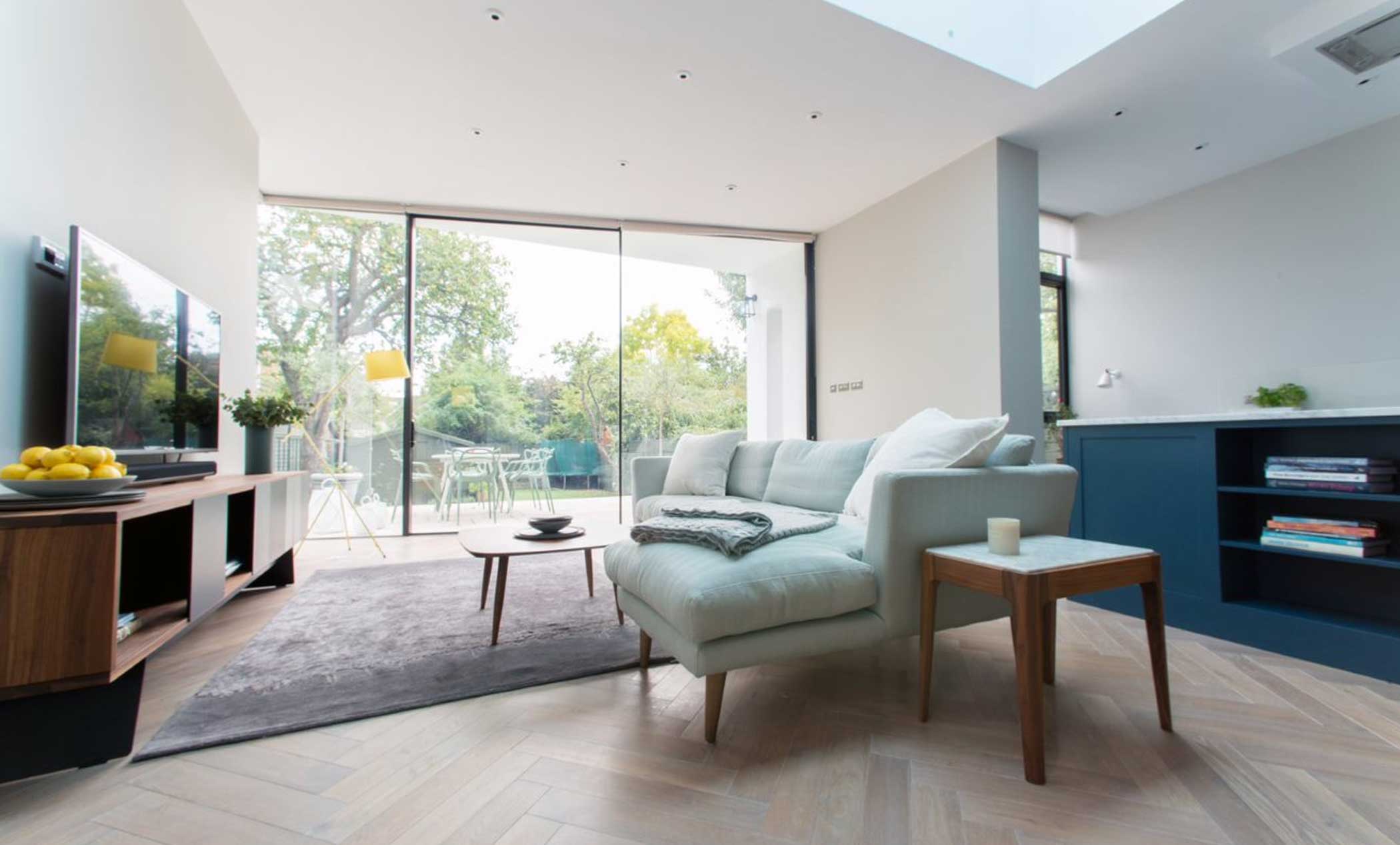